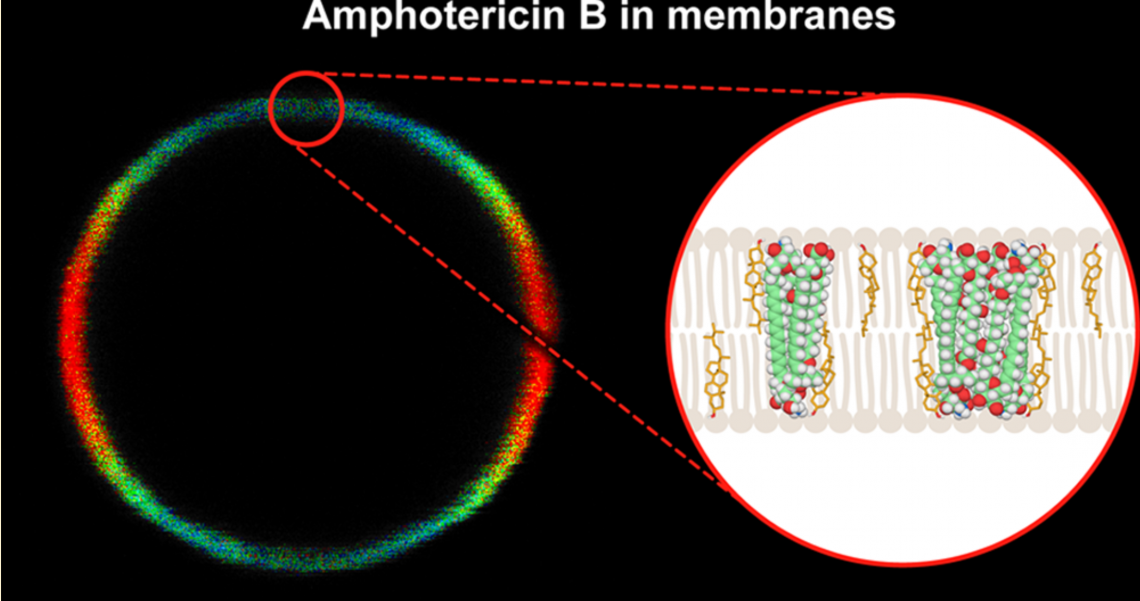 Amphotericin B is a lifesaving polyene antibiotic used in the treatment of systemic mycoses. Unfortunately, the pharmacological applicability of this drug is limited because of its severe toxic side effects. At the same time, the lack of a well-defined mechanism of selectivity hampers the efforts to rationally design safer derivatives. As the drug primarily targets the biomembranes of both fungi and humans, new insights into the binding of amphotericin B to lipid membranes can be helpful in unveiling the molecular mechanisms underlying both its pharmacological activity and toxicity. We use fluorescence-lifetime-imaging microscopy combined with fluorescence-emission spectroscopy in the microscale to study the interaction of amphotericin B with single lipid bilayers, using model systems based on giant unilamellar liposomes formed with three lipids: dipalmitoylphosphatidylcholine (DPPC), dimirystoylphosphatidylcholine (DMPC), and 1-palmitoyl-2-oleoylphosphatidylcholine (POPC). The results show that amphotericin B introduced into the water phase as a DMSO solution binds to the membrane as dimers and small-molecular aggregates that we identify as tetramers and trimers. Fluorescence-detected lineardichroism measurements revealed high orientational freedom of all the molecular-organization forms with respect to the membrane plane, which suggests that the drug partially binds to the membrane surface. The presence of sterols in the lipid phase (cholesterol but particularly ergosterol at 30 mol %) promotes the penetration of drug molecules into the lipid membrane, as concluded on the basis of the decreased orientation angle of amphotericin B molecules with respect to the axis normal to the membrane plane. Moreover, ergosterol facilitates the association of amphotericin B dimers into aggregated structures that can play a role in membrane destabilization or permeabilization. The presence of cholesterol inhibits the formation of small aggregates in the lipid phase of liposomes, making this system a promising candidate for a low-toxicity antibiotic-delivery system. Our conclusions are supported with molecular simulations that reveal the conformational properties of AmB oligomers in both aqueous solution and lipid bilayers of different compositions.